Hollyland Cosmo 1200 Wireless HDMI/3G-SD - The Hollyland Cosmo 1200Plus allows you to transmit an HDMI/SDI signal up to 1200' line-of-sight to an HDMI or dual SDI outputs. The transmitter/receiver set supports up to 1080p60 signals with a latency of <1 ms. The transmitter offers one HDMI and one SDI input, one 3.5mm stereo audio input, and one SDI loop-through output. The receiver offers two SDI and one HDMI output.

The system operates on the 5.1 to 5.9 GHz frequency band and is encrypted to prevent video leakage - only the matched receiver shows clear images; unmatched units are unable to receive video, even when on the same frequency. The system supports RSSI (received signal strength indicator) and has multi-channel selection, which allows you to choose the cleanest channel for transmission. Both units also feature a bright, easy-to-read OLED display.

The transmitter is designed to be powered via an L-series battery plate or a 2-pin LEMO connector, and the receiver features a Gold mount battery plate and a 2-pin LEMO connector. Two D-Tap to LEMO cables are included to provide the flexibility to power both units via a cable connection to separately available, compatible batteries. The transmitter uses two antennas and the receiver, five antennas. All seven plus a spare are included, and two mushroom antennas are also supplied as replacements for the transmitter antennas.

Included in the box 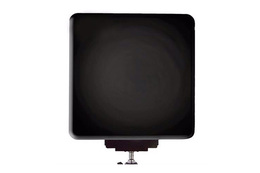